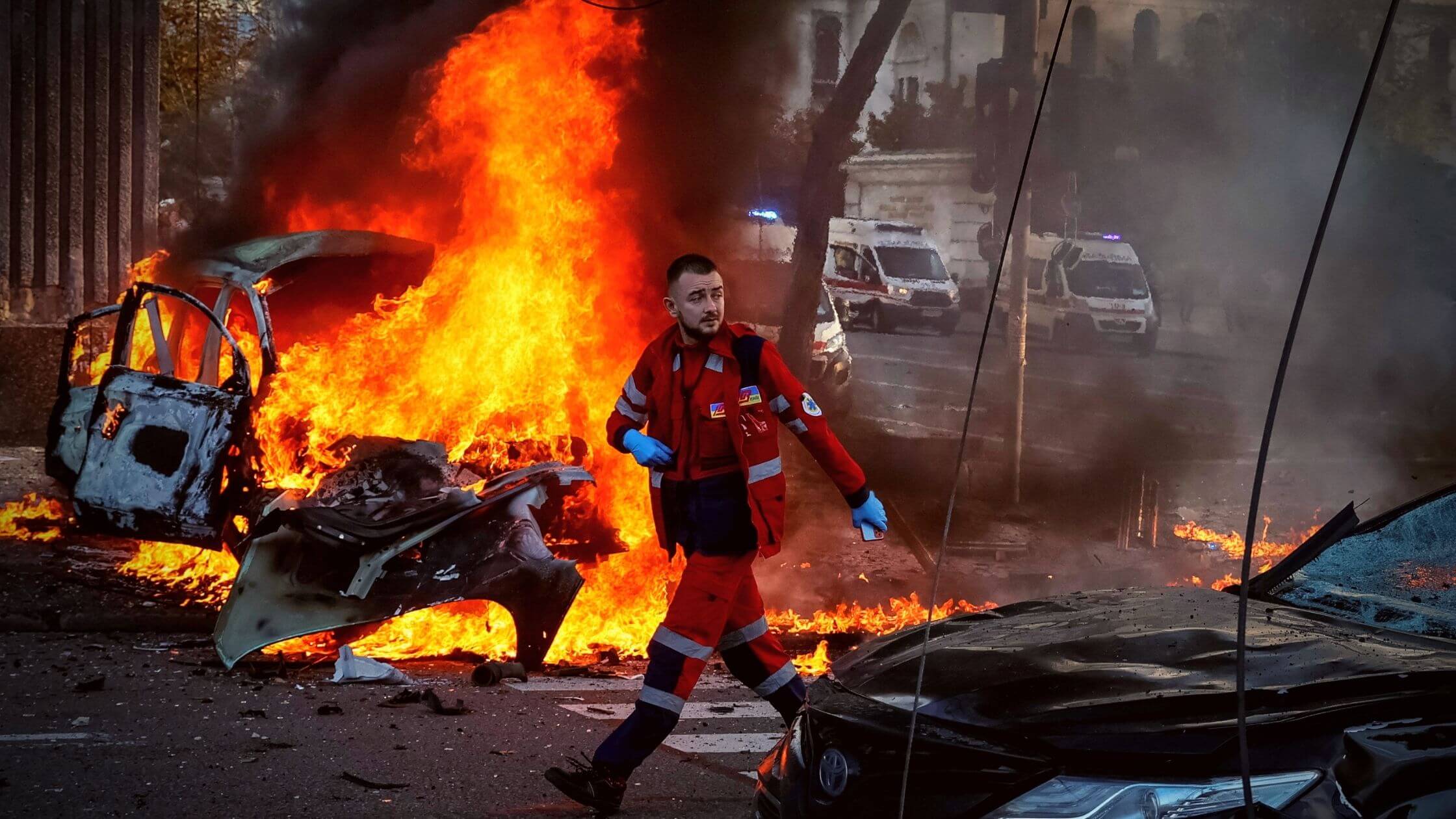 Months have gone by since Russia decided to wage war against their neighboring nation and each passing month is felt like a living hell for the Ukrainians and residents.

In the most recent attack, on Wednesday, Russia continued to bombard Ukraine with missiles, hitting vital energy infrastructure and residential areas, causing blackouts to spread throughout the entire nation, including in the capital Kyiv and the western city of Lviv.

Governor Oleksiy Kuleba reported at least four fatalities and at least 34 injuries, including five children, in the Kyiv area.

Reacting to the horrible state of affairs was Volodymyr Zelensky, the president of Ukraine, who urged a “firm reaction” to the bloodshed in a video address to the U.N. Security Council.

Brave Act Of Resistance And Resilience

But even despite the carnage, in what seemed to be a brave act of resistance and resilience, the Ukrainians were seen standing together with hope.

After fresh Russian missile strikes on Wednesday left the city and much of the country in the dark, residents of Ukraine’s bombed capital crammed into cafés for power and warmth and switched defiantly into survival mode.

The residents were pictured moving among the ruins while maintaining their strength to carry on with the hardships of daily life. While repair crews worked to reconnect supplies, some residents of the three million-person city resorted to collecting rainwater from drain pipes.

On Thursday, engineers and emergency personnel fought valiantly against snow, freezing rain, and blackouts to restore services. People dealt with hardships all over the nation. By hand winches, miners were extricated from the depths of the earth.

The difficulty of repairs, the length of blackouts, and the threat to the public have all worsened with each missile attack.

Worried friends and family members messaged each other to find out who had their electricity and water back. Many had neither after the aerial assault on Ukraine’s power grid. Aside from the necessities and amenities, even life itself needed to be constantly reassured as the massive bombings hit Kyiv.

Even though Russian attempts to weaken Ukrainian resolve were met with defiance on Thursday night, millions of people remained without power as the toll of Russia’s relentless missile attacks rose. One of the most upsetting attacks in recent weeks, the barrage on Wednesday left dozens of people injured too.

Collecting the resident’s emotions and reactions, a reliable source reported that a native Ukrainian man reportedly woke up to discover that while the electricity in his third-floor apartment had been restored, the water supply had not. The blackout caused his freezer to thaw, leaving a puddle on his floor.

According to Vitali Klitschko, the mayor of Kyiv, about 70% of the Ukrainian capital still lacked electricity on Thursday morning.

Kherson experienced its heaviest bombardment since Ukrainian forces recaptured the southern city two weeks ago on Thursday, as Kyiv and other cities began to recover.

Four people were killed by the missile barrage outside a coffee shop, and a woman was also killed close to her home, according to witnesses who spoke to The Associated Press news agency.

However, even though the world witnessed western leaders lining up to condemn the bombing campaign, Russia remained steadfast in its attacks.

Russian UN Ambassador Vassily Nebenzia reassured Russian Defense Ministry Spokesman Igor Konashenkov’s statement that the strikes against infrastructure were in response to the unrestrained flow of weapons to Ukraine and the reckless appeals of Kyiv to defeat Russia.

As the situation in Ukraine remains grave, authorities are opening tens of thousands of so-called “points of invincibility,” heated and powered spaces that provide hot meals, electricity, and internet connections to the residents, calculating the present and future difficulties as the winter progresses.

As of Thursday morning, more than 3,700 were operational throughout the nation, according to Kyrylo Tymoshenko, a senior official in the presidential office.

What Is Known About The Virginia Walmart Shooting Victims?