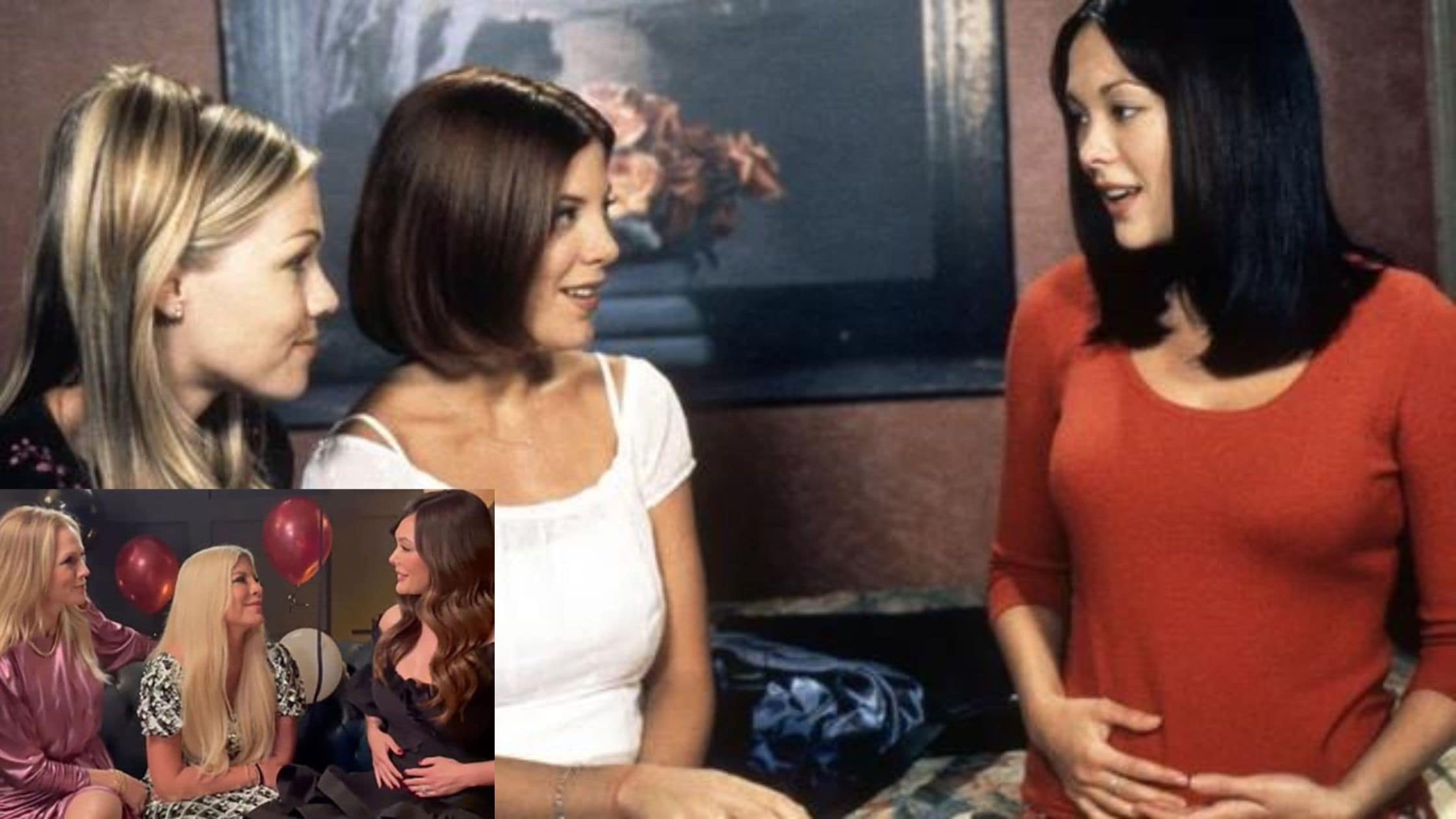 Tori Spelling recreated moments of “Beverly Hills 90210” on her Instagram page along with co-stars Jennie Garth and Lindsay Price which took the fans to the memories of the 1990s. Spelling played Donna martin in the show while Garth portrayed Kelly Taylor and price played Janet Sosna.

They redacted a scene from 1999’s “Let’s Eat Cake”, season 10 of the drama in which Janet talks with Kelly and Donna about being pregnant with Steve’s baby by featuring Beverly Hills album. The video features the three stars recreating their memories using a fun transition along with a trending song “I’m Just a Kid” by a simple plan. The reenactment wasn’t just to refresh the memories of 90210, but it was a way for Tori to promote their upcoming episode of In The Spirit with Lindsay and Curtis.

Beverly Hills is an American television teen drama that was created by Darren Star and produced by Aaron Spelling under the production company “spelling”. The series of ten seasons ran from October 4, 1990, to May 17, 2000, on Fox. The series discusses the lives of a group of teens who lives in Beverly Hills, 90210 franchise.

Beyond the fact that the hugely popular series gave rise to both Garth and Spelling as stars at a young age, Garth and Spelling are inexorably linked to the legacy of Beverly Hills 90210. Together with Lan Ziering as Steve Sanders and Brian Austin Green as Devid silver, they were initially some of the few members of the ensemble series to appear in each of the 292 episodes.

Spelling and Garth were among the four people who made up the series’s spine throughout his historic run, despite some of the other stars of the show being more well-known in pop culture, such as Jason Priestley as Minnesota transplant Brandon Walsh and Luke Perry as local bad boy Dylan McKay.

The drama was iconic at the time as it dealt with the complicated lives of a group of friends from their school to college period. The story portrays the navigated relationships, alcohol, heartbreak, drugs, and more throughout their teen years which was so relatable to the teen audiences.

Spelling and Garth have additionally made guest appearances on several competitions such as MasterChef USA and an episode of RuPaul’s Drag Race when they served as the directors for the competing queens in a 90210 remake.

In 2020, the cast member of Beverly hill 90210 including Spelling, Green, Garth, and Doherty celebrated the 30th anniversary of its television debut by posting their tribute to the show on social media.  In honor of the show’s 30th anniversary, Spelling and Garth jointly created a podcast  90210MG which engages the audience to look back to the episodes of the show.

The reunion made the stars as well as fans more excited and refreshed the memory of all-time favorite television drama. Going back to the 1990’s stars of Beverly Hill recalls their experiences in their acting. The co-stars maintained their relationship even after years of the show. Price shared the videos on her Instagram page with the caption, “New Year, same zip code”.

Tori spelling gave a visual treat to the fans of Beverly hills with a fun glimpse at her New Year’s eve plans. The stars are celebrating the upcoming year with a big reunion which brings much excitement to the series lovers. The fans are looking forward to the coming episode of “In The Spirit” with Lindsay and Curtis. To enhance their memories of their time on the show they regulate revisiting the podcast, 90210MG which they launched in 2020.

Daisy Jones & The Six Are Reuniting In A New Series